2018 will bring some BIG trends to reality. 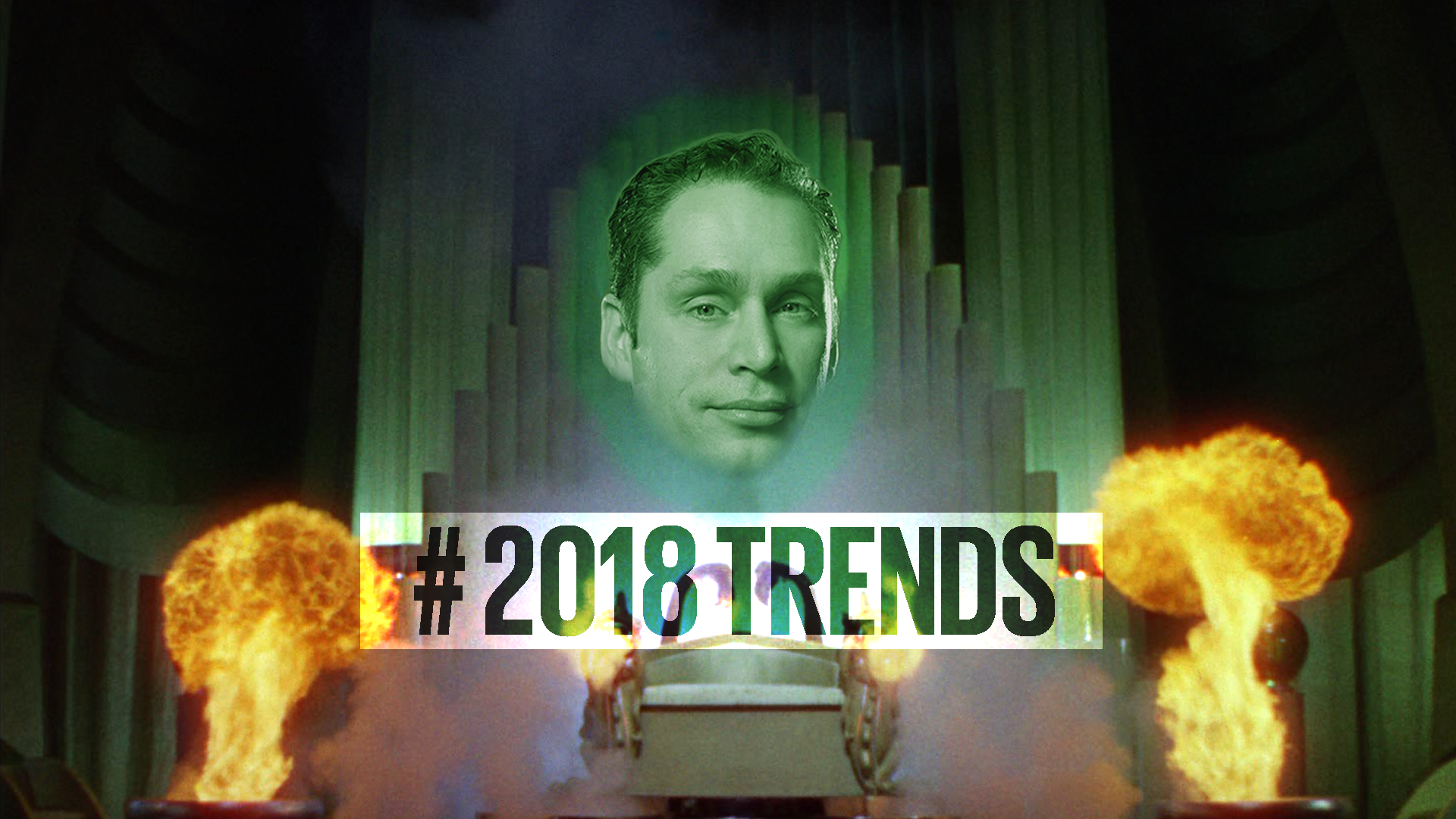 Ah yes, it’s that time of year again, as 2017 starts to wind down, we begin gazing longingly at 2018 and making educated guesses about where things will go next year. So time to don my futurist hat and spin out some thoughts on what the next year may have in store for us. After endless reading and delving deeply into the multiverse of Forbes, Wired, Inc, Fast Company, The Economist, Recode, AdAge and many many others… let’s dive in with some predictions:

Video – Video is exploding and will take centre stage across all devices and platforms in 2018. I think we will see videos becoming much more “shoppable,” making it easy to buy what you’re watching. With the monster content players spending billions on video in 2018, the platforms and ease of distribution will drive the market. Video will soon become so pervasive and be so well produced that it will reign as the top content we digest on our mobile glass-clad smartfriends.

Live Streaming – When done right and used properly (not in some half-baked gonzo way), live streaming will augment the booming video market, allowing brand influencers to talk directly to their audiences.

Voice Search – Voice is clearly becoming the go-to search of choice. Plus, with AI home assistants entering the market at warp speed and many people getting comfortable conversing with them like they’re one of the family (versus typing a query), watch this explode in 2018.

Mixed Reality & AR – New platforms for augmenting the world and information around us will burst out, now that both Google and Apple have this functionality natively baked into their mobile products. Look for augmented wearable devices to start showing up this year as well as new technologies that can place virtual things right into our real world, as these platforms are finally ready.

AI  – “Machine learning” (another term oft used for artificial intelligence) is making the next leaps forward. At its core is a technology that enables the discovery and leveraging of new patterns through crunching vast amounts of data – delivering up things you want to know the answers to as well as things you didn’t know you don’t know! We are going to see much more personal and contextual storytelling appear, as AI algorithms start to truly understand who we are and predict what we want.

Generation Z – Sorry Millenials, but we’re seeing all kinds of new stats, character breakdowns and cohort analysis coming forward re: Gen Z (1995-2012) in every publication, so expect this new cohort to start taking centre stage in 2018.

Mobile First Content – Mobile is surpassing desktop as the device of choice for viewing content and it will continue to grow at quantum leaps as this burgeoning world comes online. Expect to see outstanding mobile content making an even bigger splash this year.

Messaging (aka “Dark Social”) – We’re now starting to see messaging platforms showing up on brand websites as a new way of engaging consumers, so expect to see WhatsApp, Messenger, WeChat, SnapChat and new entrants popping up to “help” you on your path to purchase. We will see real-time engagement expand and will not know if we are speaking to humans or bots (plus many brands will begin to seriously outsource their customer service to bots).

Ephemeral Content – Content that has a lifespan and disappears has been Snapchat’s moniker, but Instagram seems to be copying Snapchat in this arena, which spells a significant trend, especially with Gen Z. Make fantastic content and make it vanish people.

Social platforms become governed like “Media Companies” (not that they want to) – With all the fake news and bad press over the U.S. Presidential election, the big social platforms are going to adopt much stronger governance over their media. I think AI will start to play a big part in sifting out malicious content. As Facebook has attested (on the stand), they do not see themselves as a media company. That said, they sell ads against content – kinda sounds like a media company?

So, there you have it. Hopefully, this glimpse into what to expect from 2018 helps guide you or at least tickles your prefrontal cortex. I’ll keep my scorecard out to see just how we progress…

Hey Siri, Am I Ready for 2018?
How do you Netflix – a shocking new habit revealed

Michael Chase - a true hybrid – part doctor, part strategist, part data monkey, part creative director, part global growth hacker (when you're doing bic pen tracheotomies you still have to think of EBITDA) and through and through an innovator.