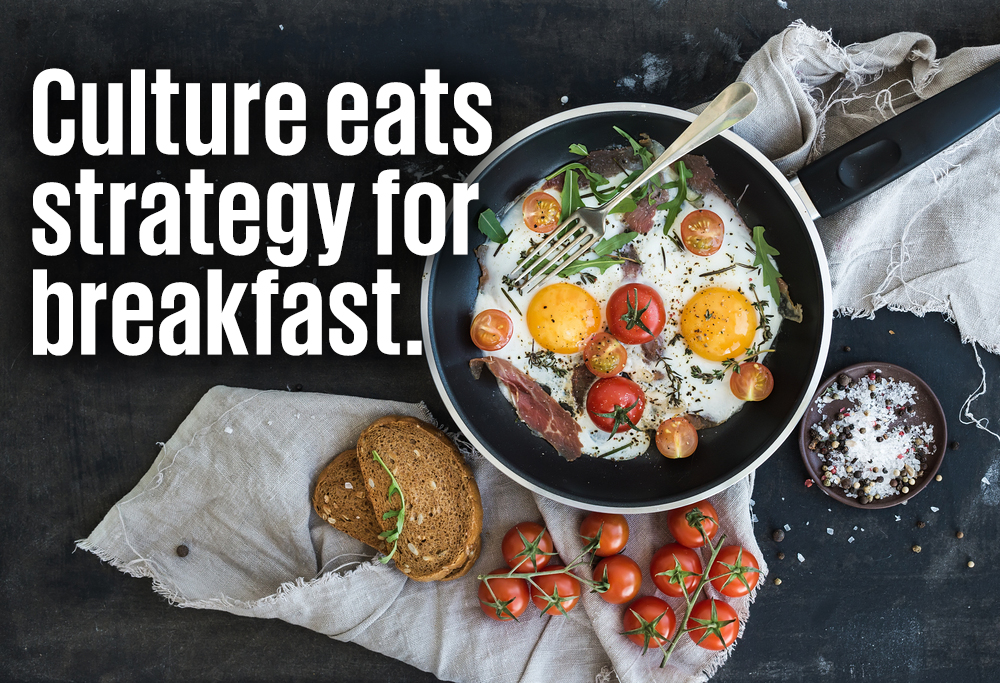 Culture Eats Strategy for Breakfast. I was listening to a great SXSW interview last week given by Kevin Plank, Founder & CEO of Under Armour. He recalled crying at a tollbooth some 10 years ago trying to explain to the toll attendant that he simply didn’t have the small sum of $2 needed to pay the fee (and how mortified he was by his situation). Considering that his company at the time – which was then trying to make its way as a newbie T-shirt startup – has now completely disrupted its marketplace and is looking to rival titans like Nike, Adidas and even Apple, the interview served as powerful inspiration.

So how did Under Armour grow at such an exponential rate? More than anything, Kevin Plank credits culture as central to its scale. “Culture Eats Strategy for Breakfast. Culture is everything. Culture is the brand.” He adds, “Data is the new oil” – but that was last week’s Mashup.

Culture – as defined – is the sum of attitudes, customs and beliefs that distinguish one group of people from another.

Experience buying an iPhone from Apple, a latte from Starbucks, a flight from Virgin, groceries from Whole Foods, shoes from Zappos, or taking a spinning class at SoulCycle… and you’ll see why culture is truly a way of life for these companies (and why they resonate with the limbic part of our brains). Culture guides their behaviours, beliefs, values and social lexicon – generally without thinking about them. This way of life is then spread, almost by symbiosis, to customers who become their loyal followers, brand guardians and staunch advocates.

In today’s hyper-challenging, competitive and fast-paced business arena, I believe most of us would agree that ideas constitute our life spark. However, the most potent of these ideas will not be granted the right to exist, let alone survive, without the right culture in place. In the cutthroat world of Digital Darwinism, the oft-quoted poster child is Kodak. Kodak was the Google of its time, but the culture of Kodak did not allow for its discoveries to take flight and flourish – and as such, they sadly went from hero to zero. Keep in mind that Kodak had its fair share of novel patents, inventions and ideas, but the company that touched many still met with bankruptcy. Many assert that Kodak’s “culture of complacency” was the ultimate culprit in its own demise.

Unlike people, companies can, in theory, live on forever. That said, most die young, because the corporate cosmos, unlike society at large, is a fight to the death. Culture, that beautiful and balanced blend of human psychology, actions, attitudes and beliefs creates the environment in which your strategies and your brand thrive or die a slow death.

So, what kind of company culture do you have? Does your brand truly resonate with people? Does it speak to your core values? What does every one of your customer touch points say about who you are as a marketplace participant? Those companies who have a strong vision guiding these very answers are the ones who will thrive, succeed over the long-term… and possibly live forever.

RIPPED FROM THE HEADLINES – TAKEN FROM A VARIETY OF SOURCES, INCLUDING FAST COMPANY CO.CREATE 2016

The Future of Brands is Experience
The Seductiveness of Data