Elon Musk and The World’s Most Brilliant Car Ad 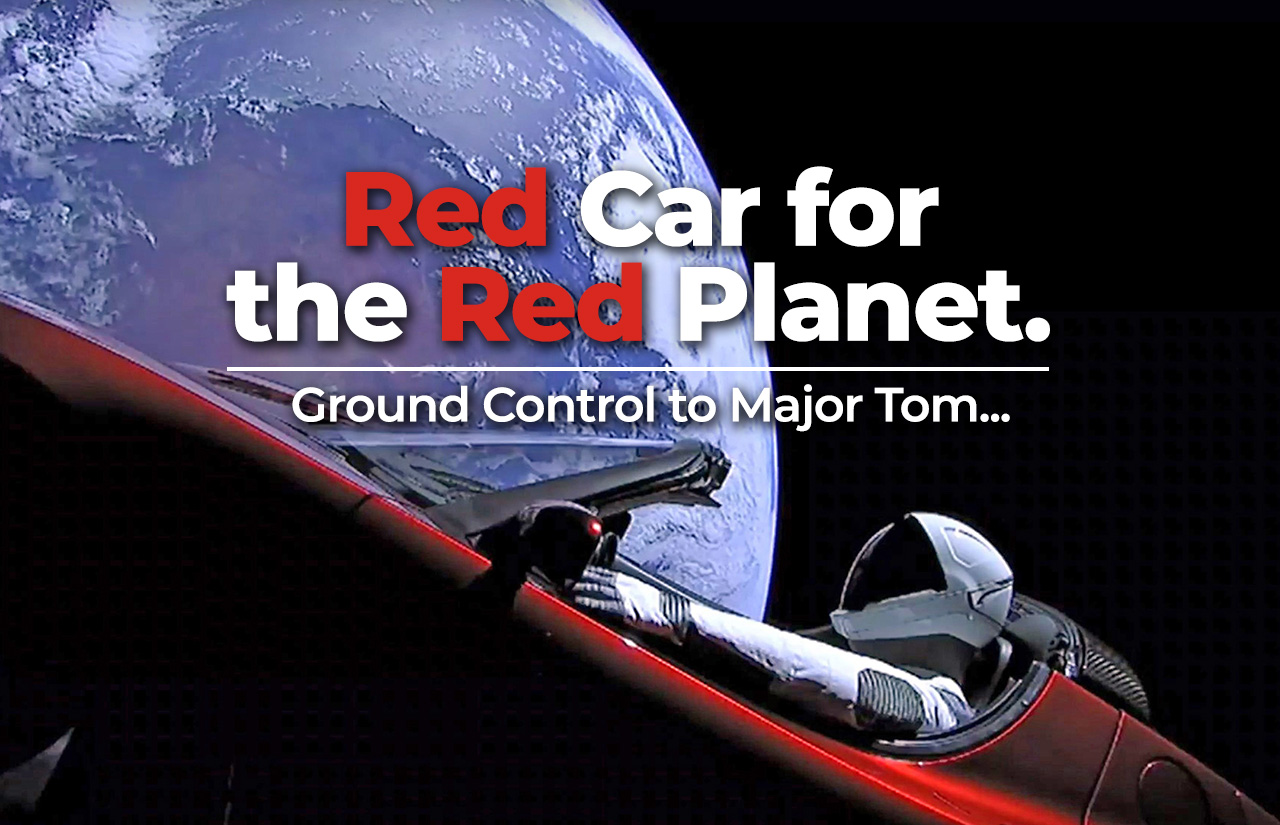 Elon Musk and The World’s Most Brilliant Car Ad. Nothing like sending a Telsa Roadster into space as the payload of a SpaceX rocket to showcase your chops as an integrated marketer! Musk’s shiny, candy apple red Telsa is now orbiting in space, and capturing the attention of the world. And though it doesn’t spend any money on marketing, Tesla has created one spectacular extraterrestrial car ad – with SpaceX footing the bill this time around.

Elon summed it up best in a beautiful tweet titled – A Red Car for the Red Planet – “Test flights of new rockets usually contain mass simulators in the form of concrete or steel blocks. That seemed extremely boring. Of course, anything boring is terrible, especially companies, so we decided to send something unusual, something that made us feel. The payload will be the original Tesla Roadster, playing Space Oddity, on a billion year elliptic Mars orbit.”

Talk about a harmonized marketing approach. Shrewd moves Mr. Musk. No brand managers for SpaceX worried about customers and brand confusion. No angry calls between marketing managers arguing over internal cost sharing. Just a simple, great idea, where one brand was leveraged for another – wow. And it garnered media coverage galore (especially from salivating automotive journalists). The real payoff was delivered once the rocket reached space and us humble earthlings were treated to a feast for the senses with SpaceX’s livestream of Earth, as the Roaster hurtled towards Mars (set to the tune of Bowie’s Space Oddity of course).

I love this galvanizing quote from Elon Musk, “I think fundamentally the future is vastly more exciting and interesting if we’re a spacefaring civilization and a multiplanet species than if we’re or not. You want to be inspired by things. You want to wake up in the morning and think the future is going to be great. And that’s what being a spacefaring civilization is all about.”

And, while we all can’t pull off incredible stunts like this one, we can all work towards attaining Mr. Musk’s Massively Transformative Purpose (MTP) – do see Peter Diamandis for a deeper dive here. Musk’s MTP provides crystal clear guidance for all that work with him. For Tesla and SolarCity, he aims to accelerate the world’s transition to sustainable energy. For SpaceX, he aims to backup the biosphere by making humanity a multiplanet species. Just a few noble and worthy goals.

This is Ground Control to Major Tom. You’ve really made the grade. And the papers want to know whose shirts you wear…

How to Engage with Consumers: A Cup of Jo Cheatsheet
How narcissistic are we?