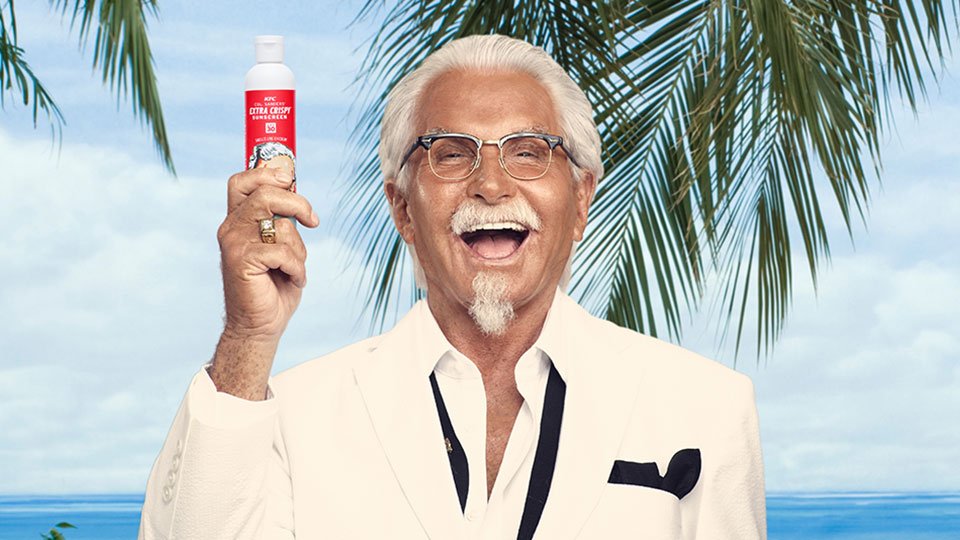 Fried-Chicken Scented Sunscreen Anyone? Yes, with KFC’s help, you too can capture a little bit of that “extra-crispy” feeling at the tail end of this hot-hot summer. “We think it smells amazing,” says KFC spokeswoman Kasey Mathes. “The sunscreen seemed like a natural fit.”

KFC has been rolling out quite a few celebrity Colonels of late (Darell Hammond, Norm McDonald, Jim Gaffigan) and now the best-known super-tanner George Hamilton makes his debut as the Extra Crispy™ Colonel with his own particular sun care regime. KFC says of the return of The Colonel – “The re-introduction of Colonel Sanders at the forefront of KFC’s marketing efforts has won over previously skeptical consumers. Beginning last summer, with Darrell Hammond’s run as the iconic founder, KFC sales have increased as the brand returns to advertising its core principle of doing things the “hard” way and celebrating its take on Southern cooking.”

So, is KFC scented sunscreen a crazy stunt? Maybe. But, with all 3,000 limited edition bottles being snapped up instantly, and the media scrambling to broadcast its greasy salaciousness… maybe not. And following on the tails of its ‘Finger Lickin Good’ edible nail polish release in Hong Kong… the brand is striving for relevance in our social savvy multiverse and… clearly thinking outside the bucket.

What could your brand do to make it bask in the sun?

To keep your skin extra crispy as summer winds down

With a little help from fast-food chain KFC, thousands of fried chicken lovers aren’t going to find themselves a little extra crispy from laying out in the sun too long this summer.

Would you slather yourself in a “healthy chicken aroma”?

Who owns your eyeballs?
Walmart buys a shiny new Jet(.com)